I’ve had this Dell workstation for a couple of years and have never gotten it fully stable. This is my first system with ECC memory. It can run for a couple weeks perfectly fine, or only a couple days at a time before it hard crashes to instant reboot then goes to a memory error screen.

I bought a bunch of compatible dimms on eBay, like twice as many as I have slots for, so I could swap any bad ones out as they were found. However, I’ve never been able to get the system stable.

One problem is that the ECC error read out in the BIOS setup section, shows 4 slots as empty (they are not). Thinking maybe some kind of config string is not being read from the DIMMs, I swapped the DIMMs around, but the last 4 slots always show as empty in the error screen. It’s also weird that it shows them as slots 9-12 instead of DIMM5-8_CPU2 like the ones at the top.

However, the screen in setup that shows the hardware present, that does show all the memory sticks as present and usable. When booted into Windows, it does see the full 32GB. 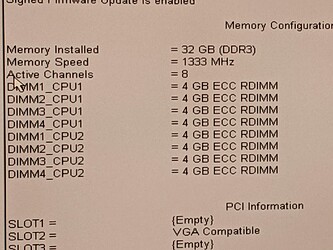 In the error screen, when I saw any error count > 0, I would swap that DIMM out, which is why those all show 0 now. If there are errors on the bottom 4, I can’t really tell, so I swapped those out also but the ECC screen did not change on the bottom 4.

I’m kind of at a loss on what is going on or what to try next.

The problems I’m having:

I know this is all pretty confusing, but I’d appreciate any tips or pointers on what to try next.

What happens if you drop down to first four slots only? Or even just one dimm?

Does the error distinguish single bit errors vs others?

In general your sources of problems could be…
A dimm
A slot
A CPU
The motherboard.