Thanks in advanced for your help. Just found the community and spent some time reading the different posts. Found this after searching for a NAS solution ( as most people do).

I’m looking to build a NAS. The big trigger was to save my newborns media as well as create backups of my devices. However, I wouldn’t discard other future uses as I already use Plex and like to learn more about networking etc. I love to tinker or have the possibility to if time allows it.

I have a Optiplex 7010 SFF with a Core i7-3770, 16gb of RAM available and not being used right now. At first, I thought I could just use that, but I wasn’t sure if that PC would be a low power consumption one as I wouldn’t want to increase my electricity bill substantially. I started comparing to other CPUs mentioned here and the TDP is somewhat close to some server options. Also, this case wouldn’t work at all for various drives given its size. All of this made me think of the following:

Hopefully if laid out the situation in a way that can be understood. I’ll appreciate all the input you can provide. Also, if I failed to learn some basic before posting this, please let me know and i’ll reinforce what i’ve learned so far.

Your i7 should be fine. As you surmised, the case is probably a bigger hurdle.

For the i7: If your NAS will be idle most of the time (most are), then TDP isn’t as important as the idle power draw. TDP is a measure of maximum heat generation under load, expressed in Watts. Its important to know, especially if your NAS will be under load a lot of the time or is in a really small case or has poor air flow. But for routine use, the idle power draw is probably more important for predicting energy consumption.

In general, Intel CPUs from the same generation and using the same silicon die will have similar idle power draw, regardless of which model it is. So, your Ivy Bridge generation, Socket 1155, Core i7, will generally perform at idle like any other Ivy Bridge Socket 1155 CPUs that others are using in their own NAS Killer 4.0 systems. CPUs with a lower idle clock speed and/or lower core count will draw a bit less power at idle, but the difference is negligible.

For the case: If you don’t want to spend too much up front, you can transplant the Optiplex motherboard into a larger case and add an inexpensive HBA card if you need more than 3 drives.

For several years, my Son’s PC was an Optiplex 7010 SFF motherboard transplanted into a “regular” PC Case. Its actually pretty simple to do and didn’t require any fabrication to make it work. But, there’s a couple things to do to keep the system from thinking something is “missing” at boot and stopping on a “Press F1 to continue booting” message, which wouldn’t be a good thing on a headless system!

thanks for the detailed reply. Since last posting, i’ve been giving it a hard look at that Optiplex 7010 SFF. If its something that you have time for, I would for sure would like to know the details on that transplant you did. ( I even have an extra motherboard and power supply for my SFF, though I imagine the PSU won’t be used in the regular case).

On a different note, I also started investigating if I decided to build something “new”. I tried searching for the Intel mini ITX motherboard recommended in the NAS Killer 4.0 list, but they are scarce and well above the price from before. This made me evaluate the option of selling my PC ( which would net me $200 dollars in the local market) and building one with about 400-500.

I checked two versions, Intel and AMD. The only thing i’m not sure if going with AMD because I read some issues with unRaid with AMD and haven’t confirmed if there are still present or not. ( The unRaid choice for OS is not set in stone, but a high contender. Others are FreeNAS and OMV)

Admittedly prices and availability fluctuate a lot during this time, but we can assume they are fairly close.

What do you think about this options? I would have to complete with about 250-300 from the sale of the Dell PC.

Thanks in advanced for your reply.

Sorry about the length. Once I started, I realized that some of this was hard to describe. Pictures would have been easier, but I’ve not got that system anymore so I had to go with words instead.

Here’s what I did for the 7010 Motherboard. Probably not the only way, but its one way that works, it boots without error messages, and requires no cutting.

A note up front: as with many transplants, there’s some feature loss. In this case, you loose the front panel connectors (USB and Audio), and some (or all depending on your case selection) of the front side indicator LEDs (Power, HDD Activity, etc.). Probably not much of an issue in a NAS though. You also won’t have an I/O shield but that’s also pretty common for transplants as well. In my case, I trimmed an old I/O shield to fit. But, but as you’ve probably seen from the forums, many folks just do without.

Here’s a couple pictures of a Cooler Master Elite 130. I used this model on one of the builds. Power “Button” in the first picture is just a strip of plastic that bends and contacts the switch underneath. The LEDs in the switch housing shine though the plastic. The actual switch snaps into the metal frame (white square on the right side in the second picure). 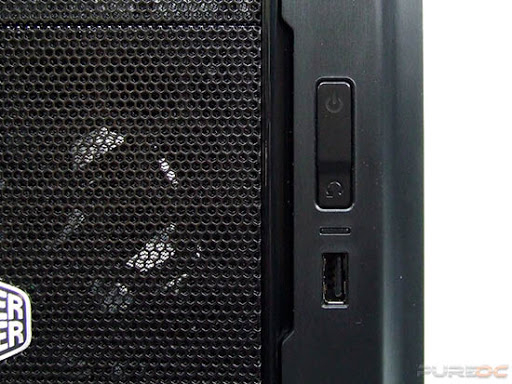 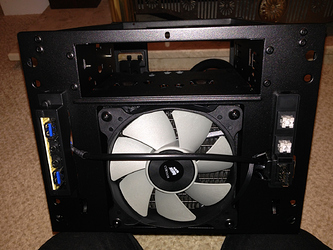 As for OS: I’ve used all three that you’re considering. I like Unraid best. If you are familiar with Linux, you can get much the same results with OMV… and I have. But, OMV requires a lot more tinkering than Unraid to do it. FreeNAS has great enterprise features, but I never used most of them, and it wasn’t as tolerant of my energy saving steps, like drive spin-down. Like a lot of Home NAS, mine is idle most of the time, and with modern drives rated for 1/2 million or better up/down cycles, its worth it to me to have drives spun down when its for hours at a time.

Concerning your hardware selections: That’s pretty personal and I’ve got no direct experience with either of these platforms on the desktop side. I will say that all three NAS OS options can be “behind the times” in terms of hardware support so its good to check the various forums and see what’s causing problems if you want to go new.