Glad to share my build using the NAS 4.0 guide.

NAS Synology DS411j from 2013 with 4 disks of 1.8TB each for an SHR Raid of 5 TB.
As i was reaching the limit of this raid capacity i was getting more and more alarms on my disks bad sectors so even if it wasn’t planned i had no choices if i wanted my data secure once more.
(Also, bad performance, 256MB of Ram, what else could be wrong in 2020…)

Based on the NAS 4.0 Guide, i went for the following pieces:

It was difficult to find the right RAM compatible as i gave it a try with an Samsung M393B1K70CHD-CH9 but wasn’t compatible, hopefully the Supermicro website contains the matrix regarding RAM which help me find the right reference.

I was lucky enough to get 4TB disks from used server out-of-warranty from a datacenter for free to lower my costs. For the OS disks i used two sata disk which i had already in stock from older laptop.

If i had to change one parts, it would be the Noctua FAN which is too big and it cost me a PCIE port in the motheboard. I would change it to the Noctua NH-L9i as advised on the guide. As i have a noisy Coolermaster V8 in my workstation it may worth it to switch it at some points in the future.

Also i added an extra Network card with 2 ports GB in order to have more ways of managing the network.

As i’m using ZFS, i have to follow the rules of the 80% capacity rules which say that once this capacity is reached i will lost performance in my pools. This lead me to a 16TB capacity which is more than the double of my old capacity on Synology.
All my disks went through a long smartctl test prior to put them back in production and i will monitor them using Munin in the near future. I went for a RaidZ2 configuration with 2 parity disks, i have also a 9th disk on my stock ready to replace any failed disks.

I’m waiting to rebuild my network stack in order to setup LACP and VLAN to have as limited as possible direct flows within my LAN to this server.
I want to use only Jellyfin as a way to consume my data through Web or Kodi.
I’m going to setup snapshots in the ZFS Pools in order to gain even more flexibility.
I may add also SSD Disk in the setup in order to setup L2ARC & SLOG caches.
Also, add an PCIE-USB3 card in order to get back my USB3 ports of my case for backup data (1+1=0) 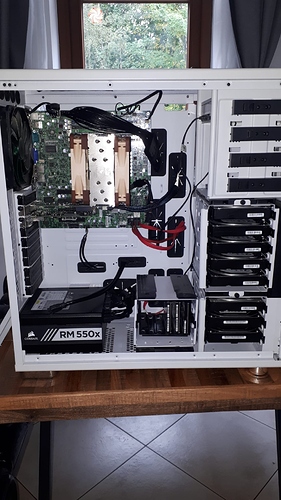 Again, thanks a lot to @JDM_WAAAT for his guide which let me find the right pieces of hardwares.