After lot’s of research and troubleshooting, I’ve finally completed my first build. This build is based off of one of the Anniversary 2.0 suggested builds. 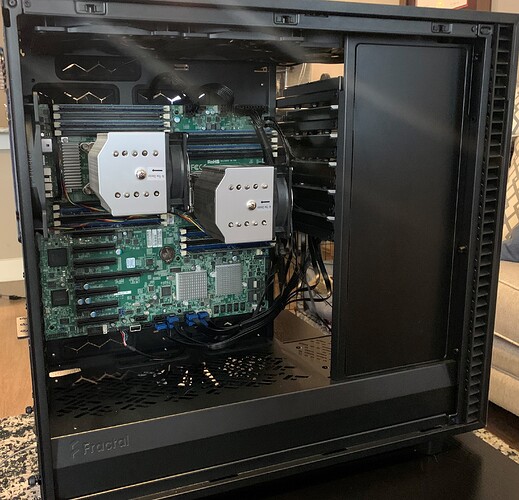 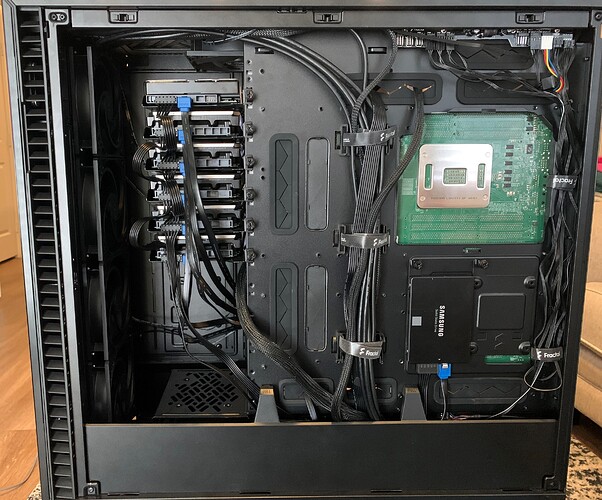 Thanks
@JDM_WAAAT - His live-streamed build video, as well as all of his other build guides proved invaluable in getting this done.
@Sunsets_US - Sold me the MOBO, CPU, CPU coolers, and RAM. The communication, packaging, and shipping was more than I ever expected. Everything worked great out of the box, and the MOBO was already pre-flashed so I was able to avoid doing that myself. He also was very helpful in answering all my questions along the way.

Thanks and always open to constructive criticism!

Awesome build! I would recommend moving all of your HDDs down as to not block your first CPUs fan as much as possible. Obviously it would become an issue again when you fill up with more drives, but then you could rotate both CPU coolers clockwise 90 degrees and use the top exhaust for the case.

Ah, I didn’t even think of that, good suggestion. Unfortunately I won’t be able to rotate 90 degrees because of narrow ILM but I will likely move the drives sometime soon!

Somewhat related, any idea why the fans constantly run at 100%? No configuration seems to stop it. Do I need to manually set the fan speed via IPMI?

Ah, I missed the narrow-ILM part.

Fan speed will be located in the IPMI. If you want quieter fans, pick up some Arctics! F9 PWM PST

I guess that is one downside to narrow ILM that I hadn’t thought about. Anyways, shouldn’t be an issue for a while.

I guess I’m not so much worried about how loud they are as I am of ruining the bearings/motors in a short period of time of them running 100% all the time. Gotta do some research on IPMI now!

Your build looks awesome! That case is epic! Since your board is an Supermicro X9, you can go into IPMI and manually set fan speeds. Also, if you end up going with unRAID, the IPMI plugin works fantastic for setting fan speed.

Thanks! Do you guys have any advice on IPMI usage with Windows 10? As usual, things are more difficult with Windows. Been watching Youtube videos and reading forums for hours with no luck.

Someone posted this link at some point. I bookmarked it anyway.

Seems like you could connect a laptop to the ipmi port on your SM X9 board. Login using SM default login credentials (admin/admin iirc).

Great. Thanks for the link!