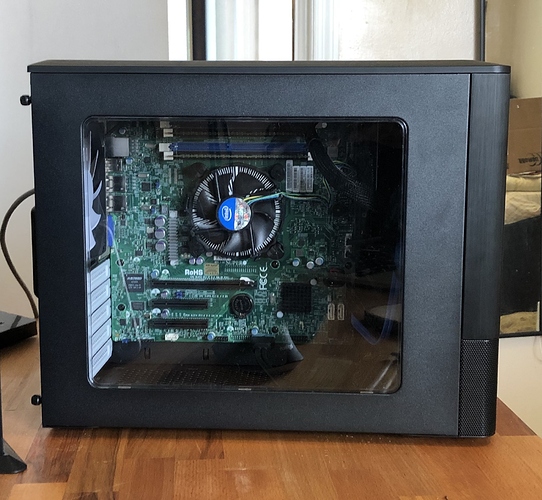 I finally got around to building a NAS because Sonarr broke when I upgraded to Mac OS Catalina, and I didn’t want my laptop hosting my Plex library anymore. I was interested in using older hardware for my NAS as my needs would be met by all the old Sandy Bridge, Ivy Bridge, and Haswell CPUs that have been dumped for Ryzen 3000 systems, and I wanted to do my part to reduce e-waste. I originally thought about going with an old prebuilt, but future issues with their proprietary PSUs scared me away.

I went with a Haswell-based system because I was having a difficult time finding unbuffered ECC RAM for a Xeon E3-based system, and I got what I thought was a decent deal on a CPU/MB/RAM package. The lower idle power consumption of Haswell vs. SB/IVB was also appealing to me. I went with a Node 804 because I wanted a smaller case. It is still nearly 50% larger in volume than a 12-bay Synology, but mini-ITX server boards seem hard to find in general, and you do get good cooling plus adequate room to build in. The trick where you modify the Cable Matters SATA power splitter to get WD shuckables working was a great idea, and much more reliable than a tape mod.

The only hardware issue I ran into while testing and building was having to set up the Unraid USB for UEFI boot instead of legacy boot. I can hear the server if I listen for it in the morning before my A/C and room fans really go to work, which counts as pretty quiet to me. I am thinking of upgrading the fans to the Arctic PWM fans, and adding a SATA SSD as a cache drive in the future.

If it weren’t for the flexibility that Unraid offers with drive sizes, I would’ve given up and went with Xpenology. Unraid’s documentation is embarrassing for a commercial product. The official documentation was as unhelpful as this community is helpful, and watching 15 hours of SpaceInvaderOne videos with no transcripts also isn’t a good answer. And I’d call myself a competent technical user who can help himself, e.g. I used rsync to transfer data onto the server after I got it booted into Unraid. Trying to get apps like Sonarr, nzbhydra2 and NZBGet to talk to each other like they would on localhost if you had installed them natively was such a pain. For now, I’ve just settled on having apps talk to each other through the server’s local IP. If there is a better way, I’d love to know because I couldn’t find it. I think a solution with Traefik, Let’s Encrypt and OAuth might be the way forward but the server works as-is right now, and I don’t wanna break it.

For about $135 less than the latest and greatest 4-bay Synology, I’ve built a NAS that is at least twice as powerful, and I’ve kept good hardware from going to the landfill. Thanks to the serverbuilds.net community for helping me put this NAS together!

Nice build! It looks like your RAM is in the non-primary slots (black), where they should be in the blue ones for proper function. Swap that when you get a second!