Hey all, it was suggested to me to post this ongoing saga I’ve had on Discord with 4k HDMI extenders onto the forum for posterity and to get fresh eyes on it. At the very least, I think what I’ve learned so far could be useful to someone (at least judging by the number of people that have privately messaged me from someone else’s suggestion on DIscord). First I’ll give background to my first issue and how I solved it (spoiler alert: trial and error) then, I’ll detail the next problem (though I’m actively troubleshooting so might be moot by the time I get there).

I have a theater wired for 7.1 surround sound and the wires for the speakers (and all the houses cat6a) are homerunned in an AV closet about 30 feet East of the center of the room in a back laundry room hallway. The theater has an Epson 6050ub mounted to the ceiling with a number of cat6a drops going to the AV Rack as well as some HDMI drops that go to the bottom of the front wall (for localized devices, this was done at the consultation of a professional AV installer). There is also similar wiring at “TV Height” on that front wall in case i’d like to redundantly wire a TV in addition to the projector. Here is a poorly drawn layout: 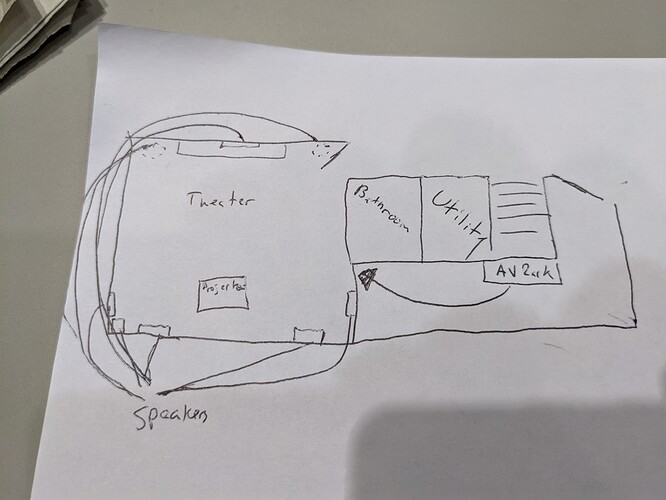 The reason it was done this way was to centralize the AV equipment but have the ability to hook up a video game system in the room so that the controllers were still usable. Both bringing the video signal TO the projector and FROM the video game systems TO the AV receiver would be accomplished with an HDMI extender and this is where the problems reside. There are hundreds of these extenders on the market and all advertise different resolutions at different distances with different features (for instance, 4k over 100m with CEC and bidirection IR). I was lead to believe it would be as easy as buying ANY of the 4k ones and simply connecting it in the chain. In fact, there is no configuration needed on any of these units but I went through 7 different brands/models and over 10 different actual units before I found one that worked.

Behold! the results (at least what I could find and remember):

Monoprice (Monoprice Blackbird 4K HDMI Extender, 50m - 4K HDMI Extension to 164 feet - Monoprice.com): Started with these so I didn’t troubleshoot them to the extent of the others but I suspect it was the most common issue, HDCP. The ShieldTV would simply not show up on the projector past the Nvidia splash screen if the signal was sent through these extenders. I tested 2 of these. Not the main concern but CEC did not work on these.

J-Tech (amzn.to/3rEPpN6) Here I started diving a little deeper with the help of some on Discord. I started rigorously testing EVERY aspect of the signal chain. It was here I realized having a small 4k monitor to test or not having flush mounted all my TV’s would’ve made my job a lot easier. But I tested on a series of non-4k monitors, the 4k projector, a PC, the Nvidia ShieldTV and cavalcade of various lengths of hdmi and cat6a cables. Here I also got in contact with a very helpful support agent at JTech who made a few other suggestions but we ultimately decided there was an issue with Nvidia, HDCP and the chipset of the model I was using. Fwiw CEC worked on these some extent. I had tried 2 different of these units when the support agent recommended an older model…

J-Tech (amzn.to/31N91DA) this model used a different chipset but unfortunately it had the same issue. No picture past the splash screen when the signal was sent through the extenders (CEC worked), but that gave me the idea that it could be just the chipset that was incompatible and it was off to the trial-and-error races (just needed to find one with a chipset that supported the Nvidia ShieldTV)

Orei (amzn.to/2YUxxAO) this was one of the more crushing technological disappointments I’ve ever experienced. I had it all set up with dangling wires in the back of my theater, i plugged in everything and voila! a picture on the projector! I was super pumped to get everything out of room and back in the rack so I set everything back up over there an it wasn’t until I’d done ALL that work that I thought to check the actual resolution displayed in the settings. To my horror it was 1080p and 4k wasn’t even an option (CEC did work though). No troubleshooting fixed this so on to the next one:

AV Access (amzn.to/3rBwzGD) What can I say? these just worked! 4k picture over cat6a and CEC worked (for the most part, it is inconsistent powering ON the projector when the ShieldTV wakes, but 100% on powering it off and volume control).

I tried to buy another set for my eventual foray into gaming systems but they were almost instantly sold on on amazon (as they still are), and needing a set for when my xbox was delivered i took a flyer on what looks like the newer model: (amzn.to/2KBkssx). I had the xbox sitting on the media center not hooked up, cause it was fantasy football playoffs and, frankly, I didn’t think it was gonna work and I didn’t want the disappointment. Well, despite my hesitation I still managed to massively disappoint myself. I plugged everything in and, after diagnosing a simple mistake I made, the xbox picture showed up on the screen. I was ecstatic. Then as I’m going through the initial setup, the xbox says something along the lines of, “Now we need to make changes so that Xbox can properly take advantage of the optimal picture settings of the TV” I clicked ok and lost the picture for 30 seconds, when it came back my xbox said, “well that didn’t work”. I knew exactly what the problem is,1080p and no 4k. CEC works, and I haven’t had time to fully test the old extender against these fully but luckily these AV Access models come with much more descriptive status lights than the competitors and one of those lights is HDCP which is currently NOT lit up. I need to do a full troubleshoot and I have a few alternative ideas (new hdmi cable and installing the xbox somewhere else to bypass the extender to name a few) but it’s also possible the run is too long (some quick math says it’s well within the advertised limits) or it’s just jumping across too many devices.

In any event, any other suggestions are more than welcome. I’ve spent the day formulating the next steps of my battle plan and a depressing amount of time thinking how I could rewire everything FOR the theater in the corner of that back hallway i drew an arrow to in the drawing. I’ll report back with what I find an end up with, hopefully me barfing this on the forums saves someone some headache.

I’m no pro but can’t help but find some interest in this issue since last time so I hope you don’t mind me just tossing out thoughts.
First thought is like I’d said on Discord… would seriously consider rerunning cabling and seeing if it isn’t too long for pure HDMI runs. That’s not that helpful though considering the work involved.
I’m not sure if I understand the section before where the text is bolded to represent what’s working. Does that mean the Xbox is somewhere not in the AV closet and has to have an additional transmitter/receiver set to get its signal there? Did we touch on just having the Xbox in the AV closet direct connected to the Denon unit? Or, why wouldn’t that work out.

Thanks for the questions/interest stuffwhy! (And for all your help in the past)

I hope I answered all the questions, but just let me know if I didn’t. I’ll report back in a few hours after I try a few things…maybe I’ll post a video to show the nonsense a little better.

Well, i guess I’m just a dumba$$ cause I hooked the xbox up to the AVR, 30ft away, through a wall and a bathroom and in a closed closet with a ton of electronics and the controller worked flawlessly. Maybe i’ll notice a lag during some high stakes online session, but i simply couldn’t tell while I was navigating menus and calibrating the picture. Thanks for the suggestion guys, I guess that was a big waste of time. I might keep the extender to play the Switch down there (cause I know from earlier attempts, that one didn’t work when connected to the rack), but 165 dollars (the cost of the extender) is a pretty high price to pay for that honor:)