I bought extra 3090 and 3080 video cards and I would like to sell them if you guys are looking to upgrade. If not, I’ll slap them on ebay or craigslist. I bought an MSI 3090 because it was the only one I could get my hands on, then an Nvidia FE card came up and I bought that because it’s a better card. Then the next day an ASUS Strix 3090 became available on Newegg and it’s arguably the best card out there, so I bought that instead. Then, yesterday my name came up on the EVGA site to purchase a 3080, so I though…hey 4 new video cards isn’t too much and I bough that one too!

I will get a timestamped picture uploaded on Thursday when the card arrives.

Each of these prices is slightly lower than the current rate on ebay. You can search completed and sold listings to get an idea of what these are selling for. I get that this isn’t for everyone, but if you need or want a card before they become more readily available…I’ve got them.

About me, I have worked as a DOD contractor for the last decade. I have multiple security clearances that I am not going to put in jeopardy over ripping someone off for $2000 bucks. I have a heatware account and I’ve been active on Hardocp since 2004, same username and profile picture.

While I do not agree with scalping, I will not remove this post.

However, I will note the MSRP of these cards: 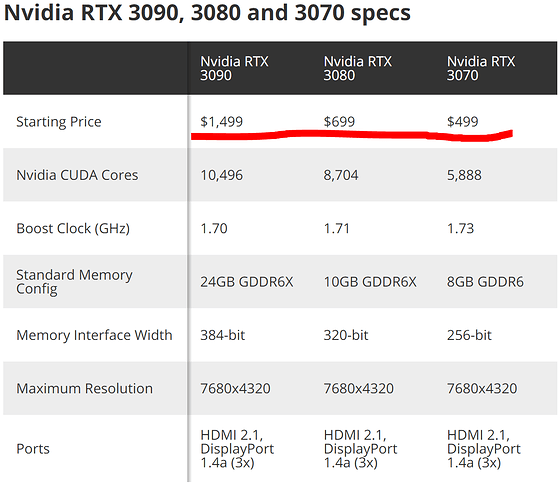 If you want to pay double instead of waiting, that’s up to you.

Thanks! I added a second picture.

I’ve recently been getting into fortune telling, and I say with confidence that this is a fortune for these cards.

Do you take Bitcoin?

How about Dogecoin? I got a ton of that laying around.

Sure, I can do bitcoin. I would just need to verify the transaction before I send the card out.