Like most - if not all of us - I have a lot of digital media. It’s like being at a strange AA meeting with data instead of booze; hello everyone, I’m a data hoarder. I have a collection of hard drives filled to capacity with photos, videos, and whatever shiny objects that catch my eye like old Linux distros. I started seeking help, not to overcome this problem, but to instead help make it easier. Now I have a pile of parts lying here, next to a pile of hard drives, next to a new case.

What have I done?

First to arrive was the Cooler Master N400

This was quickly followed by an ASUS Prime Z390-A

Two sticks of 16GB Crucial DDR4 RAM were next to arrive on my doorstep.

An Arctic Alpine 12 CPU cooler was tossed into the same box along with some smashed air pillows. I am not sure why the packer thought this would protect anything.

For storage I have a new Crucial BX300 SSD with a whopping 240GB. I suppose this will be the cache drive. Additionally there are three 8TB WD drives I will be shucking.

I also ordered a SanDisk 128GB low-profile flash drive that should arrive before the end of the year. Since Unraid allows me to kick things off with one drive, then swap it to a new drive without penalty, I can at least get the ball rolling without waiting for it to show up.

What do I plan to do with this stuff? Obviously Unraid for starters, and Plex is also a must. Beyond that, I am not really sure. I have some online server space where I have Nextcloud running, which hosts Joplin for me. I may see about moving that onto my OTiS.

I moved this year, my previous home had an amazing fiber connection that never dropped out on me, the new home has cable and it can be sketchy sometimes. That’s been the kick in the pants I needed to actually start building this thing. At least now when it dies there will be some form of entertainment available. Then there’s the joy of having everything in one place for the first time in years. No more playing musical hard drives!

Anyways, bear with me. I will try to remember and get some photos as I start moving things along. For some it will be like watching paint dry, for others maybe they will find it interesting. Another random fact before I wrap this post up, I am not an IT professional, I know enough about this to be dangerous. I’ve built computers, hardware I am okay with, it’s software where I tend to get lost in the sauce. If I am lucky then I won’t be letting the magic smoke out of anything and we end up with something useful!

This sounds super exciting! Keep us in the loop!!

Well, here it is, the pile of parts. 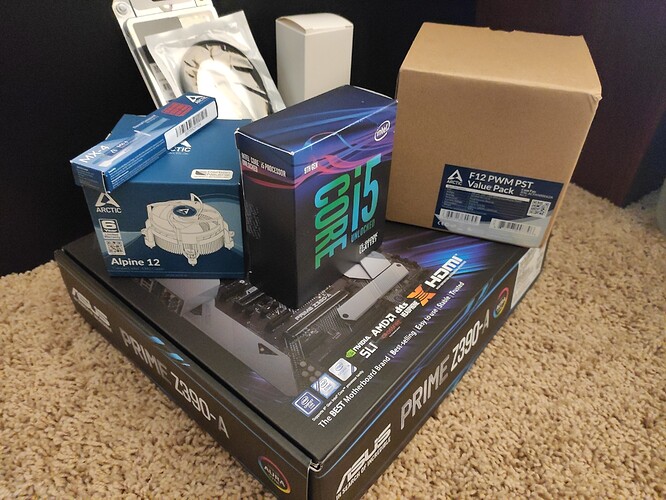 To get things started I took off the fans that came with the case and sat them aside for some other future use. I started installing fans and discovered that one of them was broken in the box. I’ll have to either contact Amazon or Arctic about getting a replacement. For now I’ll survive with what I have. Here we go, should do a good job of keeping the drives cool. 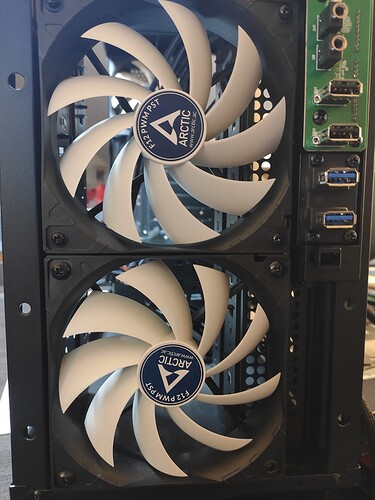 For some reason I always get nervous installing CPUs. I know, go slow and take your time, but there is always that nagging doubt. Here we are before I took the plunge. 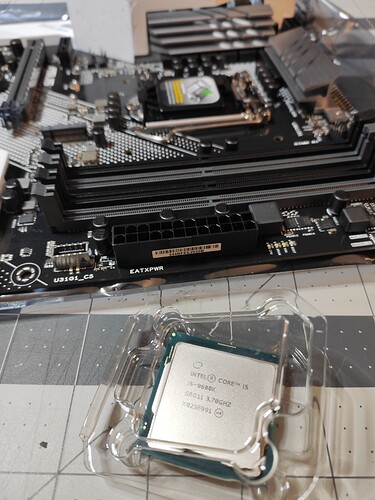 The PSU is one I already had on-hand. It’s essentially new, so I installed it and then the motherboard. The wiring for the CPU is really irritating. It is just a shade too short, so I cannot zip tie it up and over neatly. Nor can I run it up the back side and over the top of the MoBo. There’s no hole, nor is there room behind the board to snake the cable, nor is there enough length. 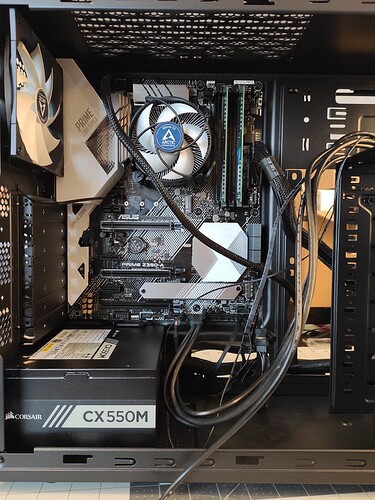 After staring at it for a few minutes I ended up going this route, up and back. With the colors of everything you’d think I was sponsored by Arctic. I wouldn’t complain if they wanted to send me something. 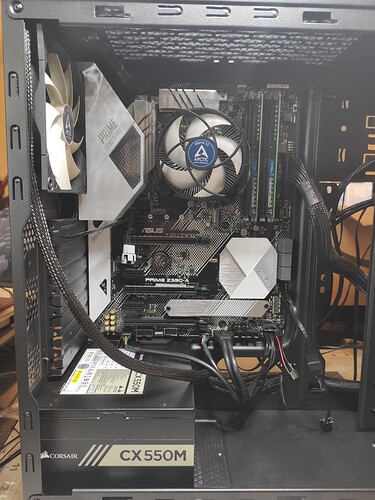 The fans all have these pigtails hanging off, and I am very tempted to cut them off for neatness sake. If I hadn’t misplaced my de-pinning tools I would just take them completely apart, sleeve the cables, and reassemble minus the pigtails. No one will see it, and there is no window in this case, but I know its there and it bothers me a bit.

That’s the current state of the server build. Still plenty of work to be done, hopefully by this afternoon I can get it fired up. Then the real fun begins. Mass migration of data. That will probably take eternity, guess we’ll see!

Time for an update I suppose, the trials and tribulations continue. Of course, this was to be expected. I spent a couple days adding some media to get things started. This also meant I had to track down all of my hard drives. We moved not too long ago so they were not all in the same place, nor in the place I remembered them being.

A WD Black drive that I thought was one of my better drives turns out to be failing. At least that what Unraid is telling me. I got the data off of it, but hate that it is already failing. Such is life, moving on.

I added some more drives to the array, got them formatted, and after another day of data transfer let it run parity-sync overnight. In the morning it was still running, and I was getting a load of warning notifications. 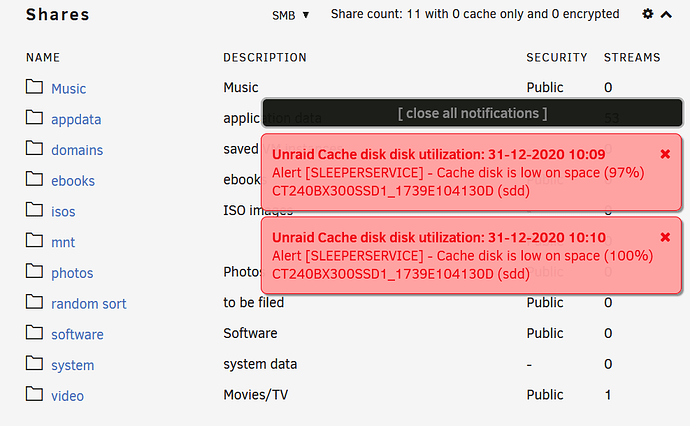 To be honest, I was a bit lost. I had put nothing on the cache drive, and felt like an idiot when I realized I had not ticked the right box when I created my shares. I made the changes but nothing happened, the cache was still full. To use a new phrase I’ve since learned, I invoked the mover. That sorted things out, and now it’s up and running properly.

By now I have added some things to Unraid. Community Applications, Unassigned Devices, Unassigned Devices Plus, and Plex. Now the only problem seems to be the network, although I don’t really understand why. I can reduce the quality of the video, say switch from 30 mb to 20 mb, and that gets things rolling. Otherwise we enjoy the spinning wheel of death.

That’s the state of the server as of today. I still want to install Nextcloud and Joplin. I also need to figure out where I stand as far as security. I have a WD 8TB parity, an 8TB WD drive along with two HGST 4TB drives in the array. For cache I have a mighty 240 GB Crucial SSD. That gives me a grand total of 16TB! Yeah, not winning any awards here for storage capacity. Fortunately there is still room for expansion. I want to grab an LSI 9207-8i and some more drives if I can find a sale. That should serve me well for a while.

Oh! Almost forgot, I sent Arctic a message about my broken fan and they said they would send a replacement. Nothing terribly exciting, but it is good news for my battered budget.

Speaking of Arctic fans, they are actually impressive. My desktop is Corsair, with Corsair fans and the CPU fan is the one that ships with Ryzen, not sure who actually makes it. My desktop is under my desk, the server is sitting on top right now, and I can hear the Corsair fans but not the Arctic right next to me.

They did spin up when I was doing a lot of transferring, but even then I believe they were quieter. I don’t know if it’s blade shape or what it is, but I think they are a better fan. I also don’t spend a lot of time on YouTube but I am willing to bet someone has already done a Noctua vs Arctic noise comparison video. Regardless, I’m giving them a thumbs up for initial quality and customer service.

Well, there we are. By now I feel like I am talking to myself. Any comments? Anything I should be doing as far as apps or tools to add to Unraid I haven’t mentioned?

Thanks for posting this! I’m building something very similar and this was super helpful in validating my thoughts. Hows the build holding up so far?

Things are still chugging right along. I’ve been busy with another project so I haven’t had time to sit down and get a few things running like I wanted to. Nextcloud looked like it would be a bit involved with getting set up properly, same for Deluge, so it will be waiting just a bit longer before I tackle that.

Tangentially related to the server, my main PC’s GPU had the cooling fans die. I ordered some Arctic 92mm fans and attached them to the GPU with a plug adapter to get things rolling again.

Back to the server though, it has worked fine. The only true bottleneck is my home network and the abysmal internet service out here in the sticks. I previously had an amazing fiber connection and now that I am on cable it feels like I am plugged into an old 2400 baud modem. Any day now I will hear a deedle deeedle deee of it connecting to the internet. I managed to choke Plex streaming two television shows while transferring two other files to the server. Again, not the server’s fault but the network issue. I’ve hard-wired where I can, the Roku is connected with a TP Link internet over powerline adapter so maybe barely faster than WiFi? I need a new router for sure.