I would appreciate a screw if you still have any left!

Just get this instead!

I figure the WLAN m.2 is useless for expansion.

That gives a 4 x SSD machine with the x16 available for GBE NIC in the x. Yes, the NVME will crush the x1 speed, so raid isn’t the right answer.

For a regular home user, I’m trying to figure out what I get out of this. Already have a nas, already have a transcoding box. Is it worth the investment to add the two brackets…?

A couple quick notes. First, regarding the Sedna PCI-E to SATA adapter, the ones that work with the 2.5" SSDs are too tall to fit in a low profile slot. Second, the 2230 m.2 slot is an E key slot, which won’t work directly with SSDs. If you really need more than 2 SATA SSDs in this system, you could in theory get a low profile PCI-E x1 SATA adapter and double-sided tape multiple SSDs in the 3.5" drive bay, with their connectors sticking out towards the rear of the chassis instead of the side where they would normally go. But I would skip all that and just get a larger SSD to put in the stock location. Or, if you need faster than SATA3 speeds, get a PCI-E to m.2 adapter and throw a second NVME SSD in the x16 slot.

Is the 290 still a good buy at its current going rate or would something else be better? I need to get something better than what I have. my current server can’t handle more than 1 transcode.

The HP 290 has skyrocketed in price due to the demand we have created for them.

His supply is going up daily though, so not sure his pricing will last. May still not go back to what it was though.

Just an update. I returned my HP 290 today and went back to my Optiplex 7020 server.

I spent about an additional $350 to upgrade the memory to 32GB and the processor to the i5 9400 ($480 total) but for the same amount, I could’ve bought a Ryzen 5 3600 (6C/12T) based system which would only be better (read more powerful) for my use case (primary server running 5-6 VMs including pfSense on ESXi 7). I have a Synology DS218+ for my basic (1 stream) Plex transcoding so not having Quick Sync wouldn’t have affected me.

The HP 290 may be an excellent choice for Plex or pfSense but there’s a lot to be desired if you plan to use it as your homelab server. Besides, the AM4 chipset would still be compatible with the upcoming Zen 3 processors but the HP 290’s chipset isn’t compatible with the Comet Lake based processors.

The only recommended use cases for the 290 are plex and pfsense. Otherwise the CPU is a little underpowered as configured. You could also look at the Otis guide if you’re still looking to offload plex transcodes via quicksync.

Is the 290 still a good option if I’m planning on building a NK 4.1 with Unraid and Dockers for Sonarr and … I mean why can’t just use the same server to run the Plex?

If you are not sharing plex and watching everything local you can run it from the same machine without any trouble. If you share plex offloading plex duties to a 290 or Otis V1 you can have the gpu do the transcoding. Check out the hardware transcoding guide and the otis guide. A 290 at the current cost is not worth it.

Got it, thank you

Does anyone know if the HP Warranty covers physical damage?

I picked up one before the price went up, but when it arrived part of the back and clip were bent in such a way that I can’t put a card in it.
I reached out to the seller and they offered a return/refund instead of a replacement. Maybe because they’re selling for more now, but who knows for sure. 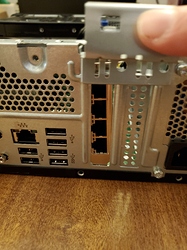 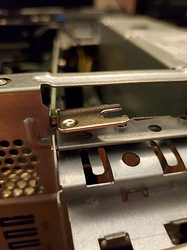 I doubt it, but VIP outlet should let you exchange.

I asked them for an exchange and they offered me a refund.

Might be worthwhile taking the refund and looking at the OTIS build.

I have one in use already as a plex transcode server, if I get the refund I’d be looking at the mini itx pfense builds.
I’m contemplating the idea of swapping ram and nvme and optane, but not sure if there’s a way to generalize a linux install the same way as Windows or if I’d have to migrate my metadata to storage and do a clean install.
Also to note, I just live chatted with HP and no the warranty doesn’t cover physical damage, but they offered to have it picked up, repaired, and returned within 4-6 business days for the low price of $199.

My HP 290 at work that I put in as a PfSense box seems sluggish at times. It’s got a quad-port intel nic, not sure of the model.

I was looking at the main login page for the WebGui and down the page is a “LOAD Average”…what is considered good? At home I’m seeing a lot of .31 .28 .24 etc

Just wondering if I need to make some tweaks somewhere.

EDIT: I went into the DNS Resolver> Outgoing Network Interfaces to WAN
Checked Forwarding Mode which gave me a syntax error for Unbound…fixed that.
Checked DNS Registration, Static DHCP, and Reg OpenVPN (for giggles)

This seems to have made my home setup a bit more snappy but it may just be my imagination.