Need to connect 24 drives what are my best options with these parts?

I currently have an ASR-72405 but when I connect the 24th drive that drive and 2 others start erroring out. If I remove that one, alls good been up and running for over a year. I’ve swapped cables, I’ve even gotten 2 different backplanes, nothing works.

If I connect the extra drive internally, all is good no problems. I currently have 2 drives mounted internally and 23 in the caddies and all is well. I want to take that one out and put it back in its proper bay.

So since it’s not the backplane or the cables I’m replacing the card and wanted to know what’s some good options that don’t require flashing, or that do I don’t care.

I can’t remember which one but I believe @Mthrboard, @Weird_With_A_Beard or @seanho knows this exact answer immediately on why you’re having issues connecting the 24th drive.

Sorry I don’t have the answer. I have 30 hard drives (2 parity 28 array) plus 2 cache SSDs and 2 more unassigned SSDs. All show up without a problem.

Are you absolutely sure it’s the BPN-SAS-846A backplane? The BPN-SAS-846EL1 does have an issue exactly like you described, if you have drives larger than 2TB, they act up when all 24 are inserted, but work fine with 23 or fewer drives. But the 846A should just be passing the drives straight through on its 6 SFF-8087 connectors, 4 drives per connector.

Thanks for the reply, you are the first person I’ve found who’s even heard of this. 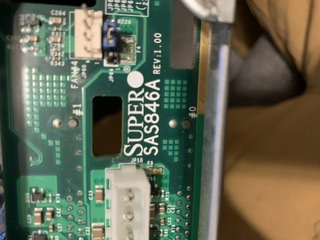 There’s a picture of it just in case since I’m
New at this. I actually have 2 backplanes and they both say 846A and both have the issue.

This is why I was thinking it was the card maybe? But that just seems weird that literally one drive added would make it flake out too.

Curious as to what card you attached them too? I’m going to test if it’s the card but would like to choose one that’s well known. My asr-72405 doesn’t get many hits when I google about it in forums or reddit.

846A backplane is good. It’s just direct SAS passthrough, should have 6 SAS 8087 connectors on it.

Just use LSI SAS cards and you won’t have an issue.

I have an LSI flashed into IT mode thanks to you in my second server and it’s rock solid. Its a dell Perc h200. Would you recommend anything specific one for my situation? If not I’ll just poke around your builds. That’s how I made this one in the first place.

I would highly recommend using genuine LSI cards. They are very cheap at this point and prevent/alleviate any potential issues with crossflashing.

Hate to be that guy but this stuff has always confused me.

Could you tell me a specific card you’d use? I am using unraid, all 8tb sata hdds (SSDs are internal and sata) so what LSI card would you use with an BPN-SAS-846a in this scenario.

The thing that confuses me is I google around and a lot of posts are debating on different cards, different back planes, what’s compatible. Like man I just want a known genuine LSI hba card or two and keep it under $200 that works great with my backplane.

You can find the LSI SAS cards you need in the recent guides, typically in the “other parts” section.

Thanks a lot! This is exactly what I needed.