I’d like to first start with a big thank you

to the discord community for all their help and answers to my silly questions.

For some background, I’ve been a PC gamer and have been building my own gaming PCs since my first 486 133Mhz machine back in the early 90s. I’ve probably built about 10+ rigs over the years, but I have to say this has been the most fun I’ve had building a computer in 15-20 years. I just built a new gaming rig in January and spent a lot of money on top of the line parts…and it was rather unsatisfying, cause I really didn’t have to do much research or much work. It was like putting together a Snap-Tite model tie-fighter - sure it looks cool when done, but was done in 15 mins and didn’t have to paint it or cut anything or glue anything or swear at decals for hours on end.

So, as a result of building the new gaming rig, I had my old rig, which was an i7-2600K with a 750GB SSD, EVGA GTX970 OC GPU, a Corsair 600T White case, a bunch of Cougar super quiet 120mm fans, etc. It was beefy enough, so I put plex on it and had leeched some movies from a friend and was running that for a few weeks. Meh - it worked, but stuttering video and such (variety of causes that I learned later through this process - but at the time my brain said to build a dedicated box). My buddy and I both started looking for how to build a better plex.

About 3 weeks later (after probably spending too much time during working hours researching) I had ruled out build a pre-build based on some discord discussions, but mostly videos where I heard the rocket-engines that are the proprietary fans in most rackmount servers. I’ve been in dozens of data centers and know how loud it is - but when you have a standalone server in a house it’s a whole different beast.

So, I settled on the NSFW build and given a pretty loose budget and my tendency to go bigger than I know I need, I ended up with below. 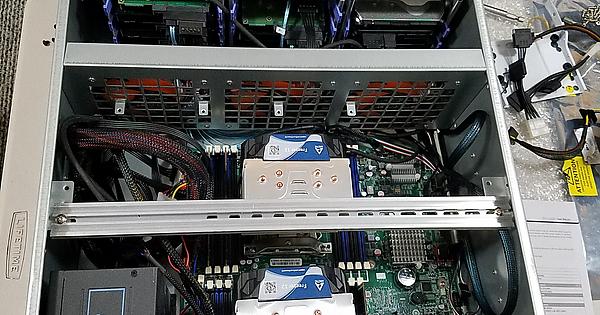 Has Unraid on it and thanks to Spaceinvader One’s videos, I’ve got my VPN, reverse proxy, and some other tweaks going.

Overall - LOVE this server and had a ton of fun doing it. It’s hosting the typical plex media server stuff. I have a VM to play around with Linux again - currently hosting a game server at the moment. I’m also planning on putting the GTX970 card in it eventually so I can game stream to my Nvidia Shields in the house. I keep finding more and more to do with it.

Again, many thanks to the discord channel for all your help, and to the Serverbuilds.net community for providing such great resources!

We would love to see some pictures! Congrats on the build.

Is the $2 on the table all the money you have left after building it?